Lynn Keller was born in El Paso, Texas. She began her music career as the singer in the Austin art punk band, Reversible Cords (Re*cords) with Bert Crews, Doug McAninch, and Tom Huckabee. The Re*cords produced two recordings an EP “33 1/3 x 4” in 1978 and a self titled album in ’79. In 1981 Lynn started an all girl band called Transisters with Kay Turner and Kathryn Miller.

After three years of U.T. Film School, Lynn moved to New York City Her first job was sound recording on the cult movie, Liquid Sky. Lynn spent most of the 80’s in NYC heading a band called Truth and Beauty Salon playing with Holly George and Susan Ceeley, and various other members who came and went.
By the late 80’s Lynn went back to Austin where she started St. Cecilia with Steve Sonleitner and Flynn Mauthe later to be joined by Kaye Klier and Sherry Baby..
Although Keller had been performing to tracks since the early 80’s, In 1992, Lynn started a solo career as Cecilia Saint performing more electronic styled music. In 1995 Keller moved back to NYC and performed for several years as Cecilia Saint. Since being ordained as an Interfaith Minister in 2001, Lynn has decided to use her given name so she can integrate her music, painting, and ministry.

Lynn Keller is an extraordinary talent. From her journeys into the worlds of punk, opera, electronica and world spiritual music, her songs carry a distinctive flare. Her dynamic voice is both powerful and transcendent, falling somewhere between Grace Jones, Grace Slick with a tinge of Mahalia Jackson.

Her songs have been in various films including “Slacker”,“Texas Chainsaw Massacre-The Next Generation”and “Electric Tribe”. Her award winning music videos have been shown in Gay Film Festivals in New York, Austin, Berlin, Montreal, Toronto and New Zealand. She has also been in several stage performances including NYC Fringe Festival “24 hour plays”, Innocent Theatre Co. production of “Blood Wedding” and punk musical, “Boy Trouble”. 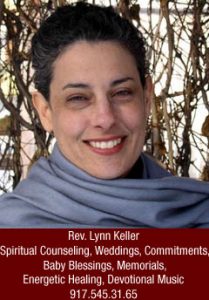